In the running months to the EOYS, I was part of the EOYS committee and assisted with Planning, however most of our plans ended up undergoing heavy alterations once actually faced with the space, boards and number of projects we had.

The past week has been a mixture of cleaning and painting and some panicked attempts at printing.

This brings to problem 1 encountered.

Generally, I’m not a fan of giving negative reviews to any business, but seriously, when I place an order for about £100 worth of prints, I don’t want to get an email back 5 days later saying that they can’t get our prints to us til Wednesday a week after the deadline.

This seems to be a commonplace situation, where the printers in Belfast had a backlog of online orders, or were not actively printing anything over the weekend, or bank holiday of the deadline.

As of writing this, I haven’t yet gotten a single print ready, though I am supposed to be collecting a number of the vital pieces at around 10am, giving just two hours to set things up. (It’s important to note that these were ordered on Tuesday the 22nd). 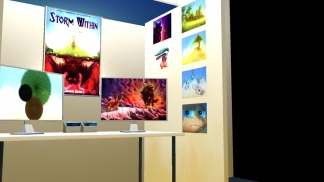 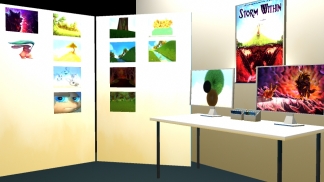 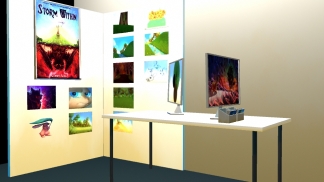 We had a small selection of ideas of how our stuff could be layed out, however upon seeing the actual space and where we would be positioned – some, rethinking was needed.

Looking at the space, we layed out what we thought might work.

However, we felt that we needed more to show and to have our poster exhibited as well, to help direct people towards us. 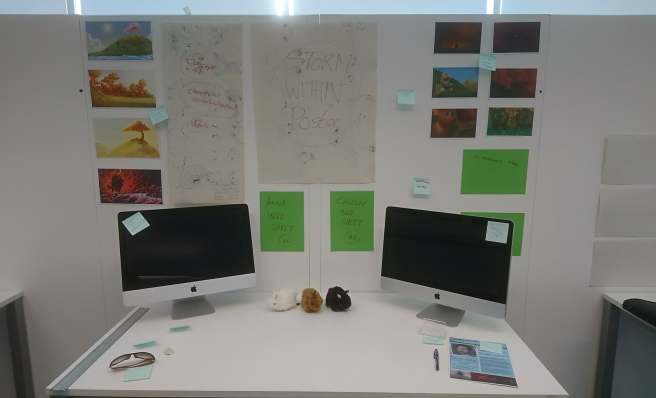 This was the rough idea we had, which we briefly highlighted in photoshop. 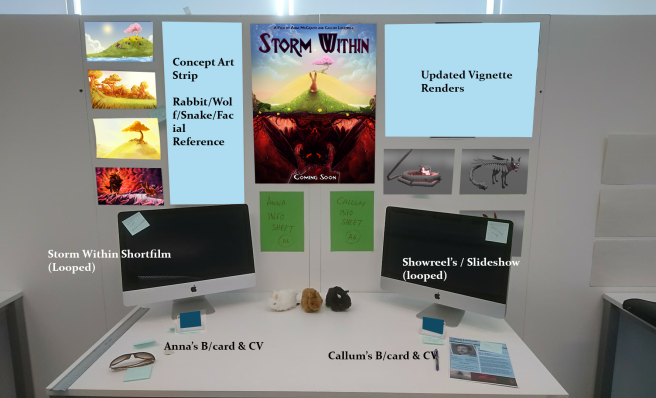 The actual content of the wall can be seen below, in it’s unprinted formats.

Vignette Renders to go on the Right hand Side. 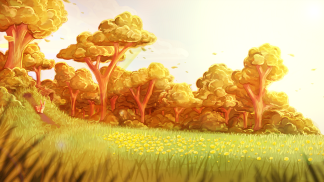 Info-pages with relevant references to our roles.

Concept and Texture Board.

And then taking the center piece. In addition to this we had 3 bunnies with some dandelions as our ‘feature’ to help tie the area together.

Upon printing everything at Windsor Prints, and sticking everything up with Velcro, which allows us to make minor adjustments to angle to help straighten things out without too much effort, it looked like this. 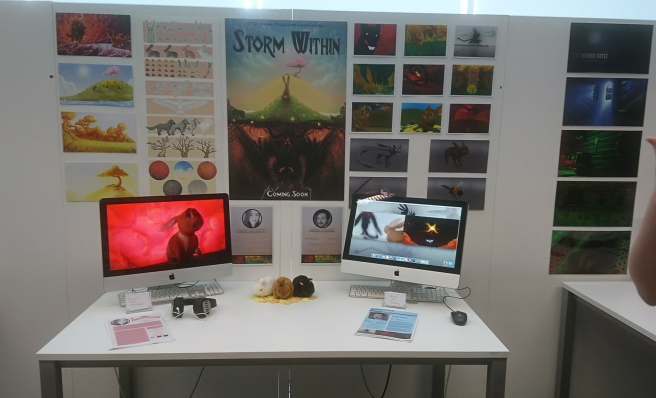 On the right we are displaying the short film, with showreels playing side by side on the right.

CV’s were also attached, and placeholders for the Business Cards that are yet to be printed.

Reflection on the End of Year Show.

Part of the difficulty of preparing materials for the EOYS was the fact that as a small team of two with limited resources, and external priorities, was that we couldn’t afford as much time or money to getting the things we would have ideally had access too.

This wasn’t just extended to the quality and quantity of prints themselves, but also the amount of additional pieces we could include, 3D Prints, tablets and the like.

Despite this, I’m pretty pleased with what we ended up getting, albiet a few minor hiccups along the way.

Rebuilding our showreels, websites and CV’s also ate into our time, and putting together a showreel on a dying laptop was a challenge, one that was thankfully relieved however just a few days before the deadline.

On the topic of my showreel, I do feel like I need to add more to it, including re-rendering some of the Zbrush Sculpts, which simply did not output with the quality I expected. I suspect this was due in part to a choppy conversion from .mpg to .mp4.

Aside from the contribution and reflection of my own stall, most of my contributions happened during the earlier months as part of the EOYS committee, before we began divving up the roles as the date approached and our plan became more secure.

One of the main things we did was try to ensure that larger teams took on the larger jobs, as they had more people, and therefore more time they could spare from their projects.

This backfired for some of us, as it meant we did not have a solid or set role to work on during the EOYS preparations.

In the end, it boiled down to doing what we could, more than anything else – cleaning, painting and moving furniture becoming about the sum of it.

All Videos are Examples and do not reflect the sum total of contribution. 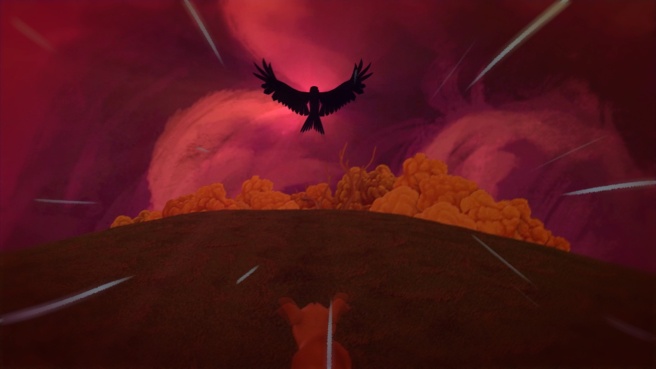 The Short Film Storm within was created by myself and Anna McCraith, whilst Anna handled the Character Animation and Compositing, as well as Texturing of characters, I dealt with the 3D Modelling, Rigging, Environment Layout and 3D Effects that you see in the film.

A brief bullet-point of my contributions broken down by scene is below.

Having finally rendered the last shot, and prepped the last bit of compositing to be done, I’m able to now fully reflect on the events of the past year.

Whilst I had started the year with the plan to keep on-top of blogging and blog as I go, I quickly fell behind on that and ended up getting caught up in the breadth of work I had to do, running out of time to blog day to day.

Now however, I’m able to clearly layout and plan what I want to say. And whilst some parts may be brief or seem self-explanatory, I hope that the blog going forward will offer a clear view of the efforts applied to this project.

I made a rough plan of what I was going to blog about and how they fit each category.